MERCI!
Lafayette's 2017 Lantern Parade and St. Martin's Day Celebration honoring Veterans was a HUGE success!
​ Thanks to so many people and organizations:

​And of course, every Veteran who has served our country! We honor you! 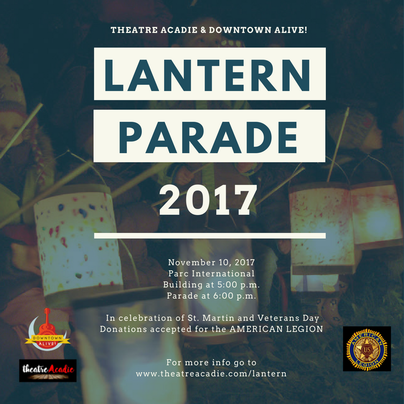 This fall, Lafayette will celebrate St. Martins Day with a traditional lantern parade! Partnered with Downtown Alive! and a part of this year's new children's program, DTA Kids!, Theatre Acadie will host the children's area located between the Children's Museum of Acadiana and Parc International. We will have a lantern making activity for kids utilizing recycled materials. The kids will learn a traditional St. Martin's Day Lantern Walk Song (see below), and at 6 p.m sharp the children will march around Parc International led by the Veteran Grand Marshall of Lafayette's 2017 Lantern Parade (see below on how to nominate).

Guests from the AMERICAN LEGION will join us to make lanterns. We will have a donation station ready to accept donations to help this marvelous organization to continue to help veterans and people of Lafayette.

This website gives an example of how we will make the lanterns.
Supplies are limited and all are encouraged to make lanterns and bring them to the parade.

LIVING VETERAN GRAND MARSHAL
​
Theatre Acadie, Downtown Alive!, and The American Legion have formed a panel that will select a Living Veteran to be the Grand Marshal of the Lantern Parade.

​ Nominations are now closed. Thanks to all who nominated. The Grand Marshal will be  awarded November 10th at Parc International.

The following is a list of our Grand Marshal nominees:

Thank you to all Veterans for your service and thank you to everyone who nominated a Veteran for this award!

We are now accepting donations for the American Legion Post 69 here in Lafayette! Simply click the donate button below!

1. Decades of Service, Decades of Song
FREE concert by the Lafayette Concert Band, The Skyliners and All Acadiana Middle School Band on Sunday, November 12, at 3 pm.  This concert will honor all of our local veterans.  This premier concert is free and open to the public.
Funds are needed now to pay for the venue expenses.

2. “American Legion Veterans Hardship Fund”
This fund is used to assist local veterans who are in immediate need of necessities such as food, shelter or medical care.  We receive many calls for help from our veterans who are disaster survivors, recently laid off, or have an unexpected emergency.  One hundred percent of these funds go directly to the veteran in need.

Find out more info about them at their website HERE.